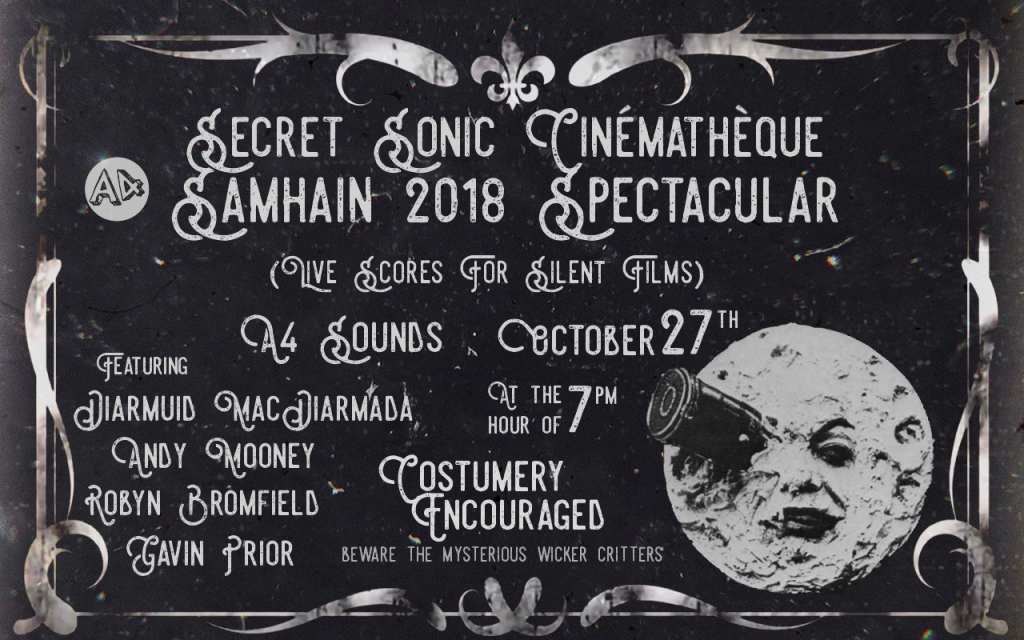 Once again at A4 Sounds, we’ll be celebrating Samhain, the end of the summer and the harvest season, and the onset of the darker days of winter. We’ll be marking the midway point between the autumn equinox and winter solstice in a way that’s become almost traditional: with another edition of our live scores audiovisual spectacular, where an ensemble of contemporary musicians experiment with the relationship between live sound and moving image.

Each musician will in turn serve as bandleader for a semi-improvised score for a chosen piece of film or films, with visuals and score intertwining to evoke the atmospherics of the ancient Celtic festival of Samhain – a liminal time when the boundary between this world and the Otherworld could more easily be traversed.  Unlike some live scores events, which seek to recreate the sort of soundtracks which audiences of silent films might have experienced in the historical context of their original showings, the Sonic Cinémathèque events embrace a more adventurous and contemporary take on the relationship between sound and vision. The concern here is more with affect and inventiveness, than strict historicity.

The Secret Sonic Cinémathèque ensemble for the Samhain 2018 edition will consist of the following musicians: Andy Mooney (organ wrangler & carrier of uncanny energies, aka AMOON), Robyn Bromfield (synthesist & feline envoy, aka catscars)  Diarmuid MacDiarmada Music (interdimensional multi-instrumentalist & auxillary absurdist) and joined for the first time by improvising musician and Deserted Village label-runner Gavin Prior (astral ambassador & supernatural emissary & who knows what else), who we’re delighted to have back performing at A4. They’ll be aided and abetted by Andrew Edgar (chief projectionist & dabbler in time-banditry), who’ll be likely playing the wrong bits of film at the wrong times and at the wrong speeds, but that’s all part of the charm of the show at this stage apparently.

Costumery is  encouraged, but watch out for the mysterious wicker critters that have been foretold to appear on the night…

The Headphone Clinic: A casual Sunday afternoon experimental audio and collaborative soundscaping experience at A4 Sounds.