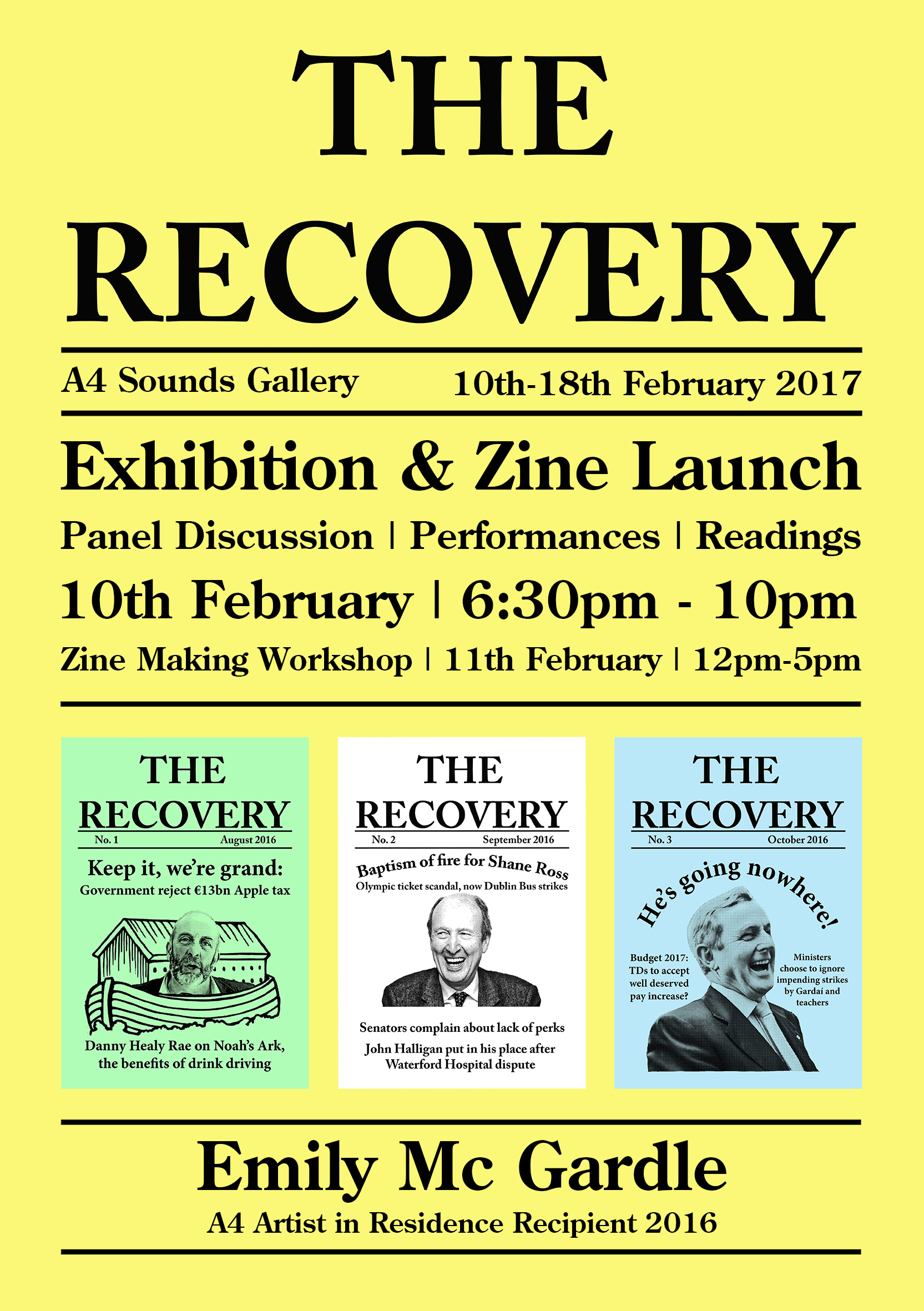 The Recovery, front covers of zines, 2016

We live in times when popular responses to politics often oscillate between defeatist, dispirited apathy and cynical, hostile antipathy. Disillusionment and disengagement are rife, as is outright confusion. It often seems the shortcomings, incongruities and stupidities of our political systems can be glimpsed more clearly through the ironies and exaggerations of the satirist’s lens, than anything can be gleaned about the world from established sources of news or media institutions. News media in particular are in something of a crisis, from failures of unbiased reportage to outright fakery, from filter bubbles to post-factuality, with satirical headlines sometimes famously indistinguishable from purportedly real ones. Much media is heavily commodified, and print media in particular often so advertiser-dependent, that the notion of an independent fourth estate, or public sphere of rational discourse and discussion seems dated and irrelevant in an age of clickbait churnalism, proliferating memes and regurgitated press-releases.

Recent artistic interventions and creative responses to such scenarios of media and politics cover a huge spectrum, from the performative to the satirical, from individual responses to particular occurrences to broader-based activist art aligned with social movements.

This event showcases the ongoing work of Emily McGardle’s The Recovery, a project created at the time of the Irish general election in 2016, and which she further developed during a recent residency at A4 Sounds. Emily uses satire to ‘highlight and exaggerate potential absurdities and ironies in Irish politics, in ways which could have the potential to be more accessible and engaging than current political discourse’.

The event will begin with readings from selected zines, including from The Recovery, with a relaxed and informal panel discussion to follow. We’ve also brought together a number of artists, performers and commentators who will on the night present their own responses to The Recovery, and to the state of Irish politics, news and media – and through our conversations and discussions, we hope to tease out ways we can tackle shortcomings in these.

Emily’s work is concerned with political imagery and discourse, and the process a person goes through in order to create a political persona: the close consideration of their personal life, appearance, and how they conduct themselves.

Printmaking is a constant feature of her practice which reflects the nature of election ephemera including posters, leaflets, and newsletters. The use of satire is an important element, allowing her to highlight and exaggerate potential absurdities and ironies in Irish politics in ways which could have the potential to be more accessible and engaging than current political discourse.
www.emilymcgardle.com

The Forgotten Zine Archive is a collection of over 1,200 zines and related print material – self-published writings and art, radical newsprint, and alternative press that seeks to document the existence of zines from Ireland. The Archive is located in Dublin, Ireland. The Forgotten Zine Archive is a record of production of particular types of niche literature over the past twenty years in Ireland.
www.theforgottenzinearchive.weebly.com

Jessamyn Fairfield is a comedian and scientist, hailing from the home of the atomic bomb. She hosts Bright Club, the variety night for lateral minds, and her one-woman show ‘Fuck This! and other stories’ was called ‘truthful, thoughtful and funny.’
www.jessamynfairfield.com

Lois Kapila is the co-founder and managing editor of Dublin Inquirer, a weekly online and monthly print newspaper based in Ireland. She holds an MA in comparative politics from the London School of Economics and Political Science. She has helped out at Dublin’s multicultural biweekly Metro Eireann, and written freelance articles that appeared in The Irish Times, The Sunday Times and We Are Dublin.
www.dublininquirer.com

Dave Lordan is a multi-genre writer, performer, editor, and educator. He has been described as Ireland’s most vital and courageous poet, and a performer of electrifying intensity. Lordan provides a portal to the inspirational power of the spoken and written word, and is currently one of Ireland’s leading educators in creative writing.
www.davelordan.com

Tom Maher is a librarian currently working in UCD and an archivist of  The Forgotten Zine Archive.

For more information about our Artist in Residence Programme for 2017 please visit:
www.a4sounds.org/a4-artist-in-residence-programme

< back to exhibition main page
< back to our work main page