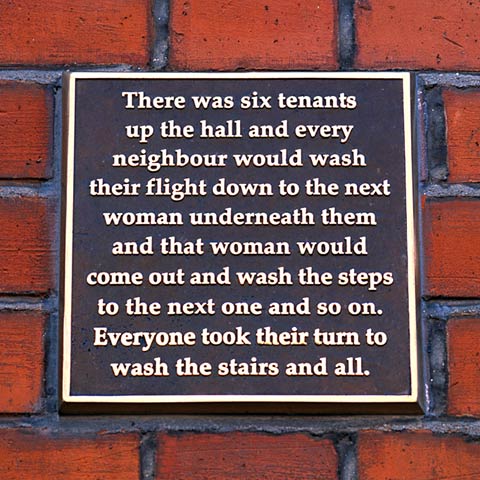 Which of the dreaded titles do you prefer; socially engaged, collaborative, community artist or another entirely?

Why did you choose the Liberties?

The scope of the ‘Heirlooms & Hand-me-downs project’ is centred around a small village on the edge of the Liberties that is made up of Nicholas Street, Bride Street, Bride Road and the Ross Road. I did not wish to include the whole area known as the liberties. The opportunity to work in this area came by way of a competition for a per cent for art commission. I was very happy to work on this project as for some years I had lived close to this locality and often passed though it or by it. I was intrigued by the appearance of the flats and sensed that the place would be a fascinating context within which to work.

How did the local community take to your coming and raising the dust on their family histories? How did you go about developing relationships as an outsider to the area?

I made contact with people in many ways. From cold-calling on flats – literally ringing on bells and knocking on doors and calling people on the phone. Then I found a contact who could introduce me to others. This made the process a little easier. I will not pretend that I found it easy to meet people – many were not interested in engaging with me. Some refused outright, others seemed to consider it yet when I turned up at a prearranged time to record a conversation they would not turn up or they had a change of mind or just would not answer the door or got someone else to answer the door. Some contacts I made through random meetings or in virtual space. On one occasion I met a couple of contacts in a pub. When I was doing a bit of research on the area in a library one of the staff told me he lived in the area and became a contributor. Midway during the process I built a website and some people from England, Canada and America contacted me. Each had either lived themselves in the area or had older relatives who had lived in the area and were remembered by some of the people still living the flats. Each of these people who had emigrated as well as some of their relatives became participants.

I found many people were quite forth coming in the interviews/conversations I had with them. However each interview was different, some people were comfortable with the process and very generous, others were more circumspect and sensitivity was needed at every stage of the process. Generally I spoke to people as individuals. I did speak to friends, to couples as well.

Before the texts for the plaques were cast and before I signed off on the text of the book I returned to the flats to show these to the people on whose recorded interviews I based them. They would often provide helpful comments and add names or correct the spelling of names. They also helped edit the completed work. I was initially worried this process may end up being a self censoring exercise as many did show their texts to spouses and family however this was not the case and if anything it strengthened the work. Though some sections had to be left out most participants helped edit his or her text until each was happy to sign a release form. This work was tough but very rewarding in that at this stage I felt that relationships were being constructed around the work. Though most people were happy to be involved in this work a few did withdraw from the process often because they were not comfortable with the content and I just had to accept this.

There are hundreds of plaques up all over the city celebrating everything from the place Ronan Keating of Boyzone once sold shoes to where Robert Emmet died, one thing that makes your plaques different is they are anonymous. What was the reasoning behind this?

The production of the plaques marked the first part of the process. The text on each is anonymous for a number of reasons. Firstly the area in question is very small; it is a village within the liberties area. People and families know each other all their lives and longer through generations. I wanted to construct a heritage that came from peoples lived personal experiences. At the same time I was very aware that the resulting plaques could be installed for as long as the buildings stand. I was aware I was asking a lot of people and I wanted to avoid an individual being shamed or marked out or in any way being isolated from their community over something that was placed on a plaque some years previously. I did not want anyone to regret their participation or become victims of this permanent text. And the issues embedded in the text are often broad social issues many of which are historical. I wanted the overall text of the plaques and the book to be a collective narrative that was in no way divisive yet honoured the experiences to each participant. In a sense I wanted this narrative to be inclusive of the diverse life experiences within the community and to be a refuge for them.

Apart from this for most of the duration of the process of making this work the participants demanded confidentiality and this was provided. Later in the process some participants wished to include the names of relatives. The book is substantially less anonymous than the plaques and almost all participants are listed on the credits page.

Do you think that with work like this there is a danger of romanticising Dublin’s ‘rare ould times’; a time of tenements and poverty for the city’s working class?

There can be a danger here. However I do not think that plaques or book fall into this. Many of the plaques are about living in poverty, with a lack of social supports. They are about the struggles of ordinary people.

There is another danger too. That of painting too dark a picture of the past. The plaque ‘Dancehall’s is based on the fact that I believe many people at this time had a rich social life and a powerful sense of belonging to community and place that we have probably do not understand or have forgotten. I know people who left the area twenty to thirty or more years ago and if they had the chance would move back.

rabble loves the pieces “Home” and “Washing the stairs” as we identified strongly with the ideas within them. Dublin is our home and cooperatively we should own it. We are rabble, we are home. Which story or stories stood out most for you?

Of course I like your choice. My choice would be the plaques I have named ‘hard’ and ‘Truth’. I choose ‘hard’ because I believe that children’s experience should be elevated to historical significance. When I was a child 40 years ago a child could and often was beaten and or humiliated at school, at home, or on the street by an adult – it was considered normal. It didn’t happen all the time but it happened fairly frequently. The year I left school (1981) they made corporeal punishment illegal. Now we are at the start of a historical break from abusive child education and rearing. Childhood is respected more now. If a child was to be slapped in school now it would result in sackings and headlines in the newspapers. When I was a child in school slapping with bamboo canes and leather straps was normal.
The other plaque I like may relate to one of the possible consequences of such abusive educational practices – addiction. In this case the person with the addiction struggles to do the best for himself and his family by applying for a flat in the area and decides to be truthful in his application, in response circumstances respond to this and he gets his flat.

In terms of authorship of socially engaged projects, often the artist’s name is used and the non-artists are referred to as said community of place or interest. Do you see this as your work have you consciously claimed ownership of this project?

As far as possible I have tried to include the names of real people living in the community. This can be seen in the book. However throughout most of the project many participants were very insistent on me being confidential. Half way through the project when I had the plaques installed I decided to put up a plaque that gave a brief description of the project and identified myself as the artist/author. I felt that as the artist I was the one who put these words onto the plaques (the local people only gave me permission) and after the fact I should be there to stand over and explain the work. I still feel that if I did not identify myself in this way I was effectively abandoning the work. This is my work and I stand over it.